Dubai, UAE, 28 September 2022: Under the patronage of HH Sheikh Mohammed bin Rashid Al Maktoum, Vice President and Prime Minister of the UAE and Ruler of Dubai, HH Sheikh Ahmed bin Saeed Al Maktoum, Chairman of the Dubai Supreme Council of Energy, inaugurated the 8th of the World Green Economy summit today. The two-day event is organised by Dubai Electricity and Water Authority (DEWA), the World Green Economy Organization (WGEO), and the Dubai Supreme Council of Energy at the Dubai World Trade Centre. A large number of ministers, officials, and experts from around the world are taking part in the Summit.

HE Saeed Mohammed Al Tayer, Vice Chairman of the Dubai Supreme Council of Energy, MD&CEO of DEWA and Chairman of WGEO, delivered the keynote speech at the Summit. 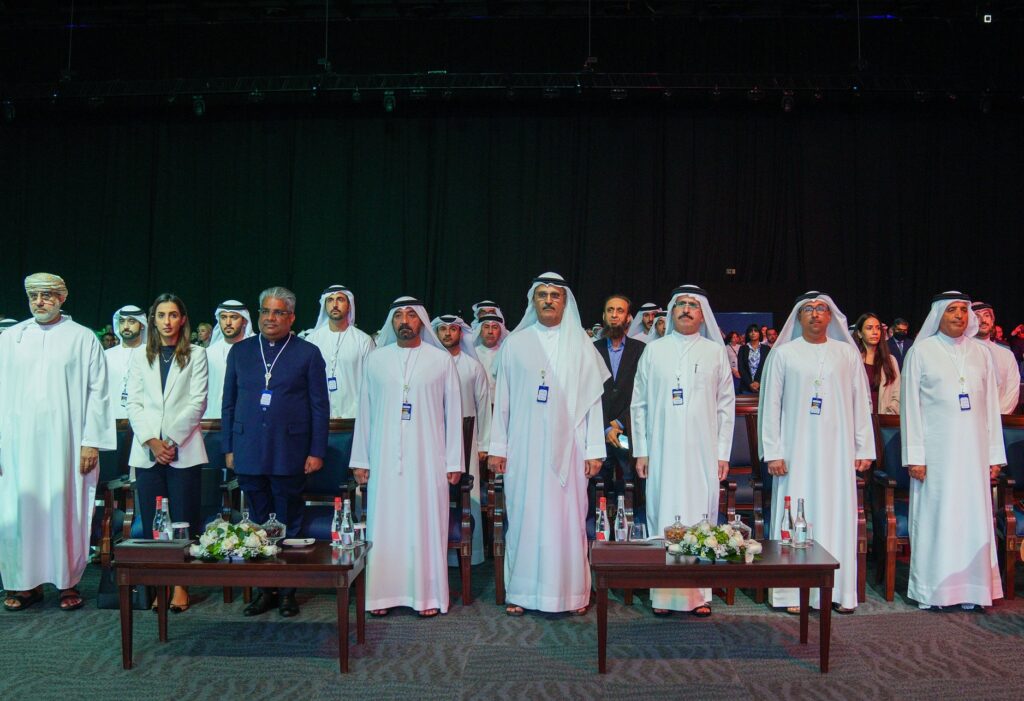 “This year, we organise the 8th edition of the World Green Economy Summit under the wise leadership of His Highness Sheikh Mohamed bin Zayed Al Nahyan, President of the UAE, who said in 2015 that : “There will be a time, 50 years from now, when we load the last barrel of oil aboard a ship. If our investment today is right, I think – dear brothers and sisters – we will celebrate that moment”. This summit also supports the wise vision of His Highness Sheikh Mohammed bin Rashid Al Maktoum, Vice President and Prime Minister of the UAE and Ruler of Dubai, in launching the ‘Green Economy for Sustainable Development’ strategy to build a green economy in the UAE under the theme ‘A Green Economy for Sustainable Development’. The World Green Economy Summit is held under the patronage of His Highness Sheikh Mohammed bin Rashid Al Maktoum and his directives to expand dialogue and promote concerted efforts to develop solutions for a better and more sustainable future for us and for generations to come. Held under the theme of ‘Climate Action Leadership through Collaboration: The Roadmap to Net-Zero,’ the World Green Economy Summit this year will explore opportunities for collaboration and exchange of knowledge and expertise among stakeholders, international and regional organisations, as well as public and private sectors, with the goal of promoting the transition towards a green economy. The theme reflects the need for international cooperation to combat climate challenges which affect the entire world,” said Al Tayer in his keynote speech. 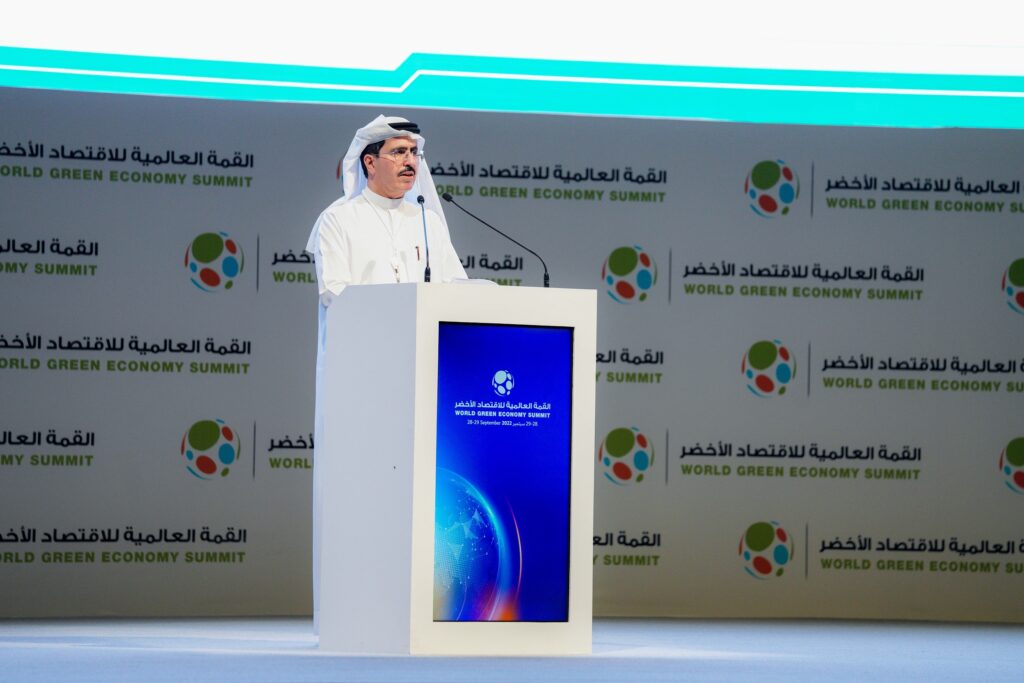 Al Tayer said that the world has witnessed major crises across all sectors due to climate change, which has caused natural disasters in various regions worldwide. Last month, Europe experienced its worst drought in at least 500 years, shrinking water levels in key rivers. This negatively impacted trade across rivers and canals, which contributes around $80 billion to the Eurozone economy. Just recently, one third of Pakistan was completely and deeply flooded with rainwater binging widespread destruction and misery. According to the World Health Organization, water scarcity impacts 40% of the world’s population, and as many as 700 million people are at risk of being displaced due to drought by 2030. The Sixth Assessment Report of the Intergovernmental Panel on Climate Change 2022 indicates that climate change will impact water quality and availability. Globally, 800 million to 3 billion people are projected to experience chronic water scarcity due to droughts at 2°C warming.

“Although climate change is the defining crisis of our time, yet we are not powerless in the face of this global threat. The UAE has been leading global efforts in tackling climate change and has always pioneered efforts to address global challenges and promote quality investments in the green economy. Selecting the UAE to host the 28th Conference of the Parties (COP 28) to the UN Framework Convention on Climate Change (UNFCCC) underlines the world’s recognition of the UAE’s efforts and its effective role in combating climate change. Last year, the UAE announced the UAE Net Zero by 2050 Strategic Initiative, with investments of more than AED 600 billion in clean and renewable energy until 2050. This makes it the first country in the Middle East and North Africa to launch such an initiative. The announcement comes as the pinnacle of the UAE’s efforts and journey in climate action over the past three decades since it acceded to the UNFCCC in 1995. His Highness Sheikh Mohammed bin Rashid Al Maktoum also launched the Dubai Net Zero Carbon Emissions Strategy 2050 to drive sustainability, innovation, and transformation towards a sustainable green economy, as well as provide 100% of the energy production capacity from clean energy sources by 2050,” added Al Tayer.

Al Tayer noted that the UAE hosts specialised international institutions in the green economy, such as the International Renewable Energy Agency (IRENA) in Abu Dhabi and the World Green Economy Organization in Dubai, among other leading organisations. The UAE consistently supports global efforts to address climate change by announcing effective solutions that enable low-carbon sectors, as well as leading projects that support the country’s future strategies and aspirations, such as Masdar City in Abu Dhabi and the Mohammed bin Rashid Al Maktoum Solar Park in Dubai. Last March, the UAE Government, represented by the Ministry of Climate Change and Environment, the World Green Economy Organization, and Dubai Electricity and Water Authority, hosted the first-ever MENA Climate Week. The event achieved remarkable success and attracted over 15,000 participants from 40 countries worldwide and 500 global speakers and experts. The event was organised in collaboration with the UNFCCC and other international partners.

“The solutions necessary to reach net zero in the future are within our reach, but we are running a race against time. Guided by the vision and directives of His Highness Sheikh Mohammed bin Rashid Al Maktoum, green hydrogen has become one of the key enablers to achieving Dubai’s plan to reach net zero by 2050. In this regard, DEWA is developing a strategy and roadmap for green hydrogen in cooperation with international consultants. The 8th World Green Economy Summit focuses on four key pillars of the green economy: Energy, Finance, Food Security, and Youth. In the Energy pillar, we will look into solutions to enhance energy efficiency and decarbonise the energy systems. The Finance pillar will focus on attracting and encouraging green investments. In the Food Security pillar, the Summit will examine approaches and methodologies to build resilience and sustainability into value chains to meet the growing challenges in this area. The fourth pillar will highlight the need to support and empower the youth who are the driving force of sustainable development and positive change in order to prepare the next generation of climate action leaders,” added Al Tayer.

Al Tayer emphasised that given the vital role young people play in the effective implementation of climate action, the World Green Economy Summit is hosting the Regional Youth Conference, which brings together which brings together MENA youth to discuss their priorities. This precedes the World Youth Conference that will be held in conjunction with COP 27 in November in Egypt, as well as the UAE’s preparations to host COP 28 next year in Expo City Dubai.

“Over the years, the World Green Economy Organization has mobilised global efforts to promote joint action to combat climate change. In cooperation with the UNFCCC, WGEO established the Regional Cooperation Centre for the Middle East and North Africa in Dubai, which provides technical support to stakeholders to increase investments in technologies, solutions and partnerships to reach a carbon-neutral economy. The Summit will keep building on what it has accomplished in the previous sessions, particularly the advancements made since the Seventh Dubai Declaration, which concluded the last edition, and the aspirations outlined in the Declaration’s framework. The Summit will also underline the UAE’s commitment to speeding the shift towards a green economy, as well as the improvements it has made in implementing eco-friendly solutions across all areas,” continued Al Tayer.

Al Tayer thanked HH Sheikh Ahmed bin Saeed Al Maktoum for inaugurating the Summit. He also valued the contributions and efforts of all parties involved in the Summit. They have helped it achieve this leading global position, playing a significant role in establishing the green economy regionally and globally. 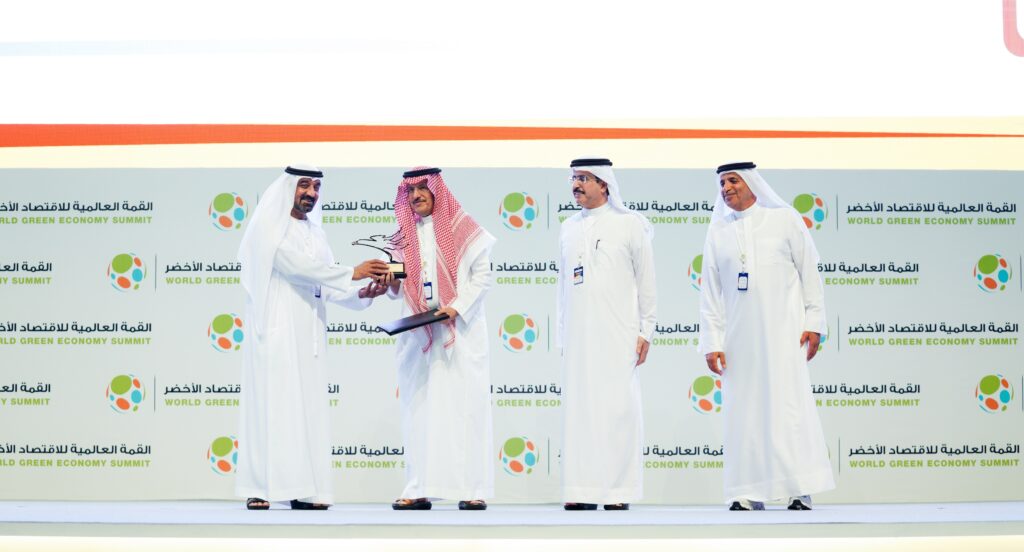 Winners in the Emirates Energy Award 2022

Energy Efficiency in the Public Sector

Energy Efficiency in the Private Sector

The World Green Economy Summit continue tomorrow (Thursday, 29 September) and will conclude with the Eighth Dubai Declaration being issued.